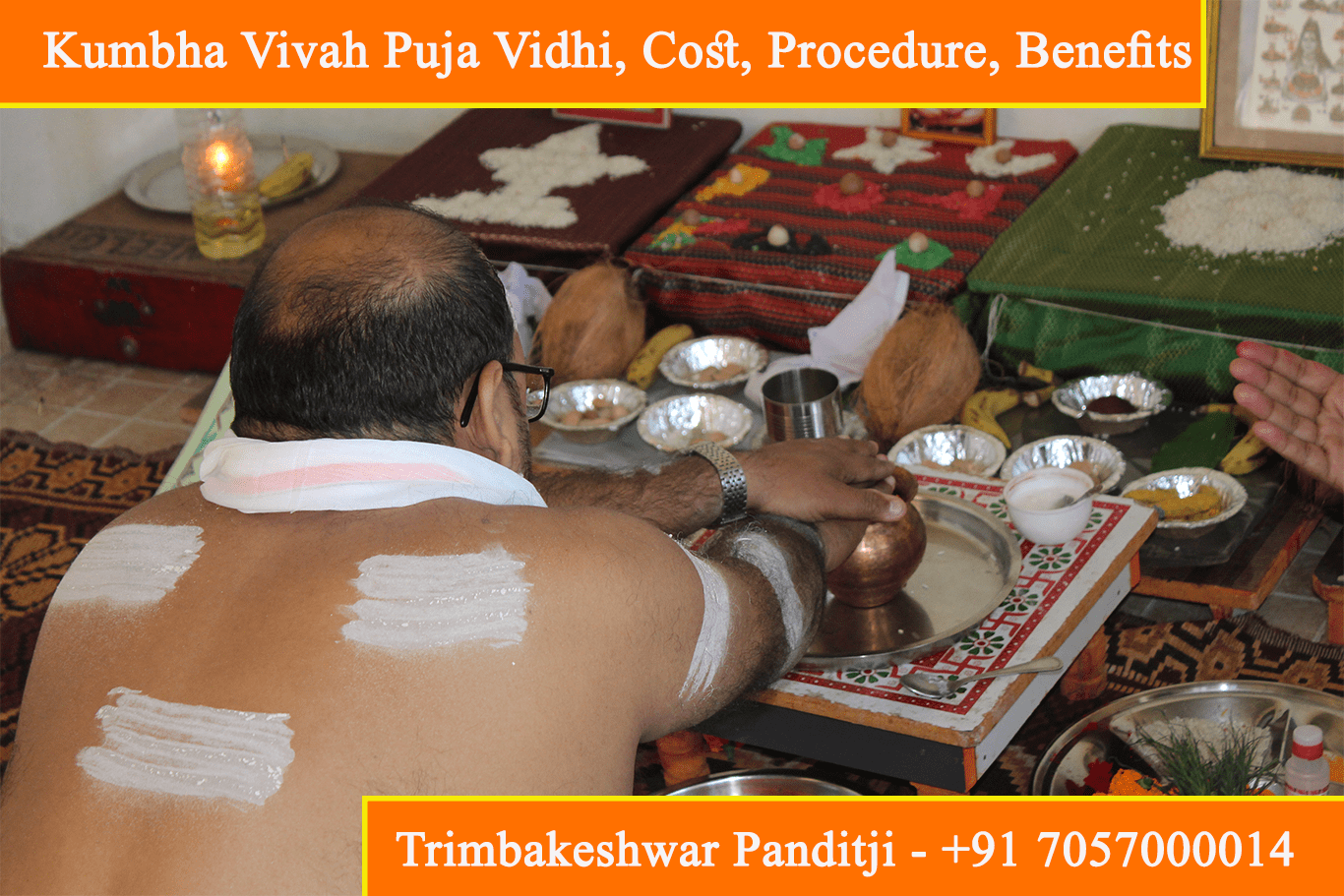 What is Kumbha Vivah?

Kumbha Vivah : India is a country where Spirituality is at the peak of everything and every issue has a Spiritual solution. Kumbh Vivah is one of the most astonishing rituals done in Indian spirituality which has a broad concept. It has an astonishing influence on human life who are affected by Manglik Dosh.

Kumbh Vivah is a fusion of two Sanskrit words Kumbh means Mud Pot and Vivah means Wedding. At the time of matchmaking, the “Manglik dosha” act as a villain. Other than having a good match from all the directions one has to get rid of the match just because of a single fault. Only Mangal Dosham doesn’t have to be the only reason for the marital separation between the couple. Sometimes there are terrible mixtures of widowhood and widower hood are there in the respective horoscopes of girl and boy which can misfire badly.

People who believe in this superstition things think that a Manglik bride will affect her husband’s early death. The bride is married to a tree-like banana or peepal, an animal, or a lifeless object to prevent this calamity. This marriage custom has various names relying on the “groom” used in the ritual.

Kumbh Vivah is only like a normal wedding. For example, if a girl has a Manglik Dosh then she has to do this ritual. Everything is like a real wedding. The Girl has to wear a wedding dress and jewelry along with a thread. Parents do “Kanya Daan” and “Phere” with the Mud Pot. Pandit recites the Mantra’s and ends up everything like a real human wedding. The girl is out of Manglik Dosh after the ceremony.

She can now marry the real person and will not be having any further problems after the wedding. Her husband is now safe from her Mangal Dosh.

Pot is the first husband of girl and hence it is a non-living thing. As per the Indian Mythology, this becomes invalid and void. Human’s wedding is her first wedding. Pot has taken all the Dosh or issues of the Girl and hence the Mangal will not affect the other person anymore.

This ceremony is astonishing in its own and I have seen many people who have got the advantage out of it. When there is heavy suffering to a girl’s mangalaya bhaav.

People follow these practices for a very long time or rather since ancient times, thus, might many people have seen results that a why.  Yes, the logical people are against its practice, but then, if we see all society and their practices then as per sanity we should forget our cultures also, as they think there is no scientific form to it.

Manglik Dosh is of two types:

1) Anshik Manglik : This dosh usually ends after 18 years of age. People do Puja to solve this dosh. This doesn’t influence too much. But people do Shanti puja so that it may finish forever.

2) Major Manglik Dosh : This is very negative and has some deadly effects on married life. If a human gets married to another with Manglik dosh then it will surely influence another person’s life. It has a single solution “Kumbh Vivah”. This is the only way which can finish this Dosh. It may give success to both Bride and Groom even if one has Major Manglik Dosh.

Who can perform Kumbha Vivah

This is not any strange situation, in fact; almost 40% horoscopes shall have this Manglik Yog. They can evaluate the malignancy of this Yog only after the depth study of the horoscope. After the complete study of horoscopes, it has been observed that only 10% to 12% of people are influenced by the adverse influence of Mars. Also, they do Kumbh Vivah to save from the divorce or divorce like problems.

Formally Engaged Couples in Love Marriage or Arrange Marriage – Misunderstandings between Bride and Groom Families – Result: Breakup just before Engagement or even after Engagement

In all 4, above mentioned scenarios common thing is to DELAY in finding the right life partner, after going through all the torture of multiple relationships, mental trauma, breakup, and divorce!

A person can save their married life by doing Kumbha Vivah. This is the main advantage of Kumbh Vivah.

People should not do these Puja at home. Also, they should do it in Temples.

What is the procedure & cost of Kumbha Vivah

If a person is advised doing Kumbha Vivah they should go to Pandit Narayan Shastri on 07057000014 & ask about its procedure. He knows about Kumbha Vivah.

This is like real marriage but there is no need to call people. This is an undisclosed marriage where the mother, mama & the brother is available. There is no Muhurat for Kumbha Vivah. This is a marriage which a person is going to end soon.

This is not expensive at all. The approximate cost of Kumbha Vivah is under INR 7000/-. Also, the mantras & procedure are similar to a real marriage.

How to save ourselves from the danger of Manglik Dosh & Vivah Dosh causing delays in marriage?

If there is a Dosh, there is a solution too and the ancient solution that people are practicing has been the most reliable and simplest solutions for such traumatic and distressing problem. Also, many couples do this Manglik Dosha Parihara under the guidance. However, they are leading a beautiful life.

Cancellation of Manglik Dosha may happen temporarily when a Stronger & Positive Graha would aspect Mangal Graha to weaken its negative power in your Kundli to stop fights, create love and romance. But the Stronger & Positive Graha’s do not remain that way always or throughout life, because depending on the Planetary Transits and Dasha, Bhukti, Antara of your Kundli, strong graha’s also weaken, that’s when Mangal Graha gains its strength and causes turmoil, relationship breakups and causes divorce, this can be nullified only if Manglik Dosh Parihar – Kumbh Vivah is performed

When Kumbh Vivah Needed the Reason

Behind the advice of Kumbh Vivah is a they’re very reasonable and justified answer given by the astrologers that if there is a possibility of divorce or the possibilities of two marriages as per horoscope then the first marriage will perform with a water pot. The logic is if the first marriage has to be finished by a break up why not marry with a Kumbh (Water Pot) & finish this marriage. This is the second marriage of the person. This is the cancellation of 2nd Marriage Yog from your life.

At the time of Kumbh Vivah, a girl’s marries with the earthen pot with all Vedic rituals as if she is being married to a boy. Also after the marriage with Kumbh, the earthen pot should be smashed.

Breakups & Divorces are connected with Lord Mangal Grah & Manglik Dosh in a Horoscope and that’s how destiny is designed in a Horoscope through Navagraha’s and in recent past Horoscopes are being studied the world over to check & improve the quality of life with comforts and reduce stress. The Western Countries divorce rate is from 15% to 60%, but in India, it’s 1% to 4%. In India, people do the Mangal Dosha solution before marriage or after marriage and save themselves from divorce.