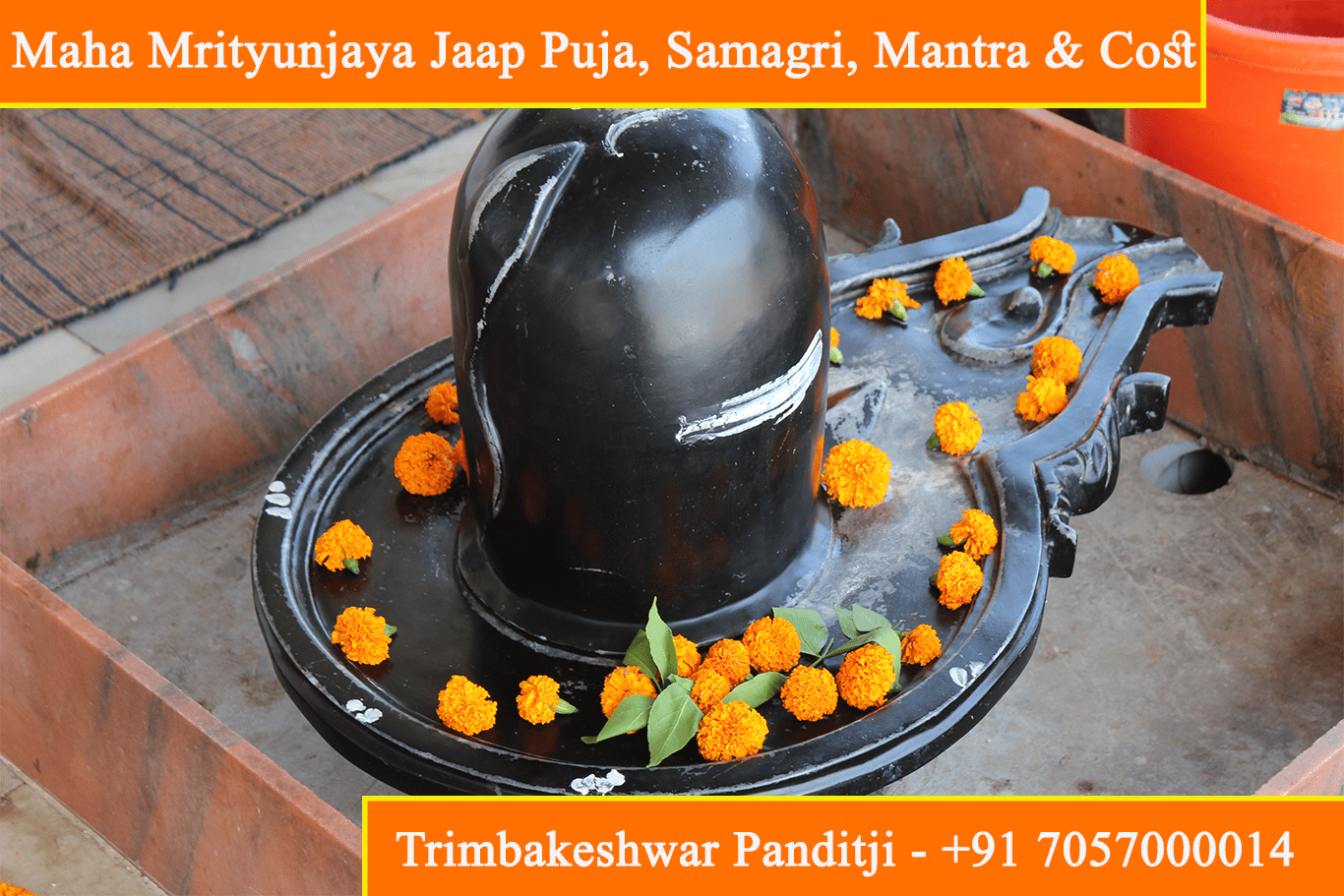 Maha Mrityunjaya Jaap Puja : The great mantra, Maha Mrutunjay, is devoted to Lord Shiva and begins from the Rig Veda. The meaning of the mantra is to worship the three-eyed God, Shiva, who undergo all living beings. Thus, any person who is afraid of negative events, loss of fear, should undertake Maha Mrutunjay puja.

Also, it is sometimes also referred to as the Rudra mantra, which is referring to the inflamed facet of Lord Shiva.

It is the greatest mantra for:

The Mahamrityunjaya Mantra is :

People do Mahamritunjay Jaap Puja for a long and powerful life and to get away from extended sickness. Especially for those on their death bed. Though, it is important to understand the meaning of the words as this makes the repetition significant and brings forth the consequences.

OM is not bout out in the Rig-Veda but has to be added to the beginning of all Mantras as given in a prior Mantra of the Rig-Veda forwarded to Ganapati.

YAJAMAHE is, “We sing Thy praise”.

SUGANDHIM is his fragrance of knowledge, presence, and strength as being the best and always spreading around. Certainly, Fragrance is the joy that we get to know, seeing or feeling his moral act.

PUSTIVARDHANAM Pooshan as the assistance of this world and in this way, He is the Father of all.

URVAAROKAMEVA ‘URVA’ is big and powerful or deadly. ‘AAROOKAM’ is ‘Disease’. Thus URVAROOKA means deadly and overpowering diseases. The diseases are also of three types occurred by the consequence of the three Guna’s and are disregard, deceit, and weaknesses.

MRITYORMOOKSHEYA is to deliver us from death on the behalf of Mokshya.

MAAMRITAAT is ‘please give me some Amritam to get out of the death levying diseases as well as the cycle of re-birth.

Our highly qualified Indian Brahman Achyut Guruji 07057000014 trained in Hindu Shastras will do this puja. Also, People do Shri MahaMritunjay puja with a particular count and calculations of chant or Jaap of Shri Maha Mritunjay Mantra. Though, the meaning of Shri MahaMrutunjay Mantra is the Mantra which can even defeat the death coming towards the person and as per MahaMritunjay puja is usually done for a person who is suffering from acute disease or whose death is comprehended as per the Vedic Jyotish in the coming times.

Lord Shiva is the presiding Lord of Shri Maha Mritunjaya Mantra in his Maha Kaal form as he is the one between Trinity or Tridevas who manage the matters connected to the death of every living being. Hence people do the prayer to Lord Shiva through Shri Maha Mritunjay Mantra that any kind of unnatural death or untimely death coming to the person should be void and the person should live a long and full life.

People do this puja as a treatment of Vedic Jyotish to mend doshas like Nadi dosh, Bhakut Dosh and other such doshas. Also, they form it at the process of Kundali matching through Gun Milan. They usually start Shri Maha Mritunjay Puja on Monday and complete it on Monday only.

The most important step in doing any puja is to do the chanting of a Mantra specified for that puja and this chant or Jaap amounts to a number of 125,000 in most of the cases. However, as per Shri MahaMritunjay Puja should preferably comprise of a chant of 125,000 Shri MahaMrutunjay Mantras and the rest of the procedure or method is made around this chant. Thus, the Pandits take Sankalpam or resolution on the day of starting of this puja, which is usually 5 to 7 in number.

In this Sankalpam, the head Pandit or the main Pandit takes an oath in front of Lord Shiva that he and his other colleague or assistant Pandits are going to do a chant of 125,000 Shri Maha Mritunjaya Mantra for a certain person who is the native and whose name, his father’s name and his family surname is also there in Sankalpam.

The particular wish asked during the Sankalp of this puja may be to save the native from untimely death, to bless the person with long age or to correct Nadi dosh, Bhakut dosh or other such doshas built in the horoscopes of a couple at the process of Kundali Matching.

After this, all the Pandits begin chanting Shri Maha Mrutunjay Mantra on regular basis for about 8 to 10 hours a day and in such a way that they are able to finish the total chant of 125,000 mantras till the decided day of finishing of this puja. The pandits/purohits keep on chanting the Shri Maha Mrutunjay Mantra on a daily basis till the day of the finishing and they complete the committed or devoted chant of mantras on that day.

After completion of chant of Shri Maha Mrutunjay Mantra, the ceremony is organized which can take almost 3 hours if done properly. Therefore, it is granted to the gods by pandits that they have finished the recitation of 125,000 Shri Maha Mrutunjay Mantra in the time guaranteed by them and in the way guaranteed by them at the day of the beginning of this puja. Also, It is also mentioned that all this chant and puja has been done on behalf of their client whose name and other details are again mentioned.

It should be noted here that this puja is done on the day of completion/finishing of Shri Maha Mrutunjay Puja follows specific actions and accordingly, this puja and procedure can differ for different kinds of Vedic Pujas.