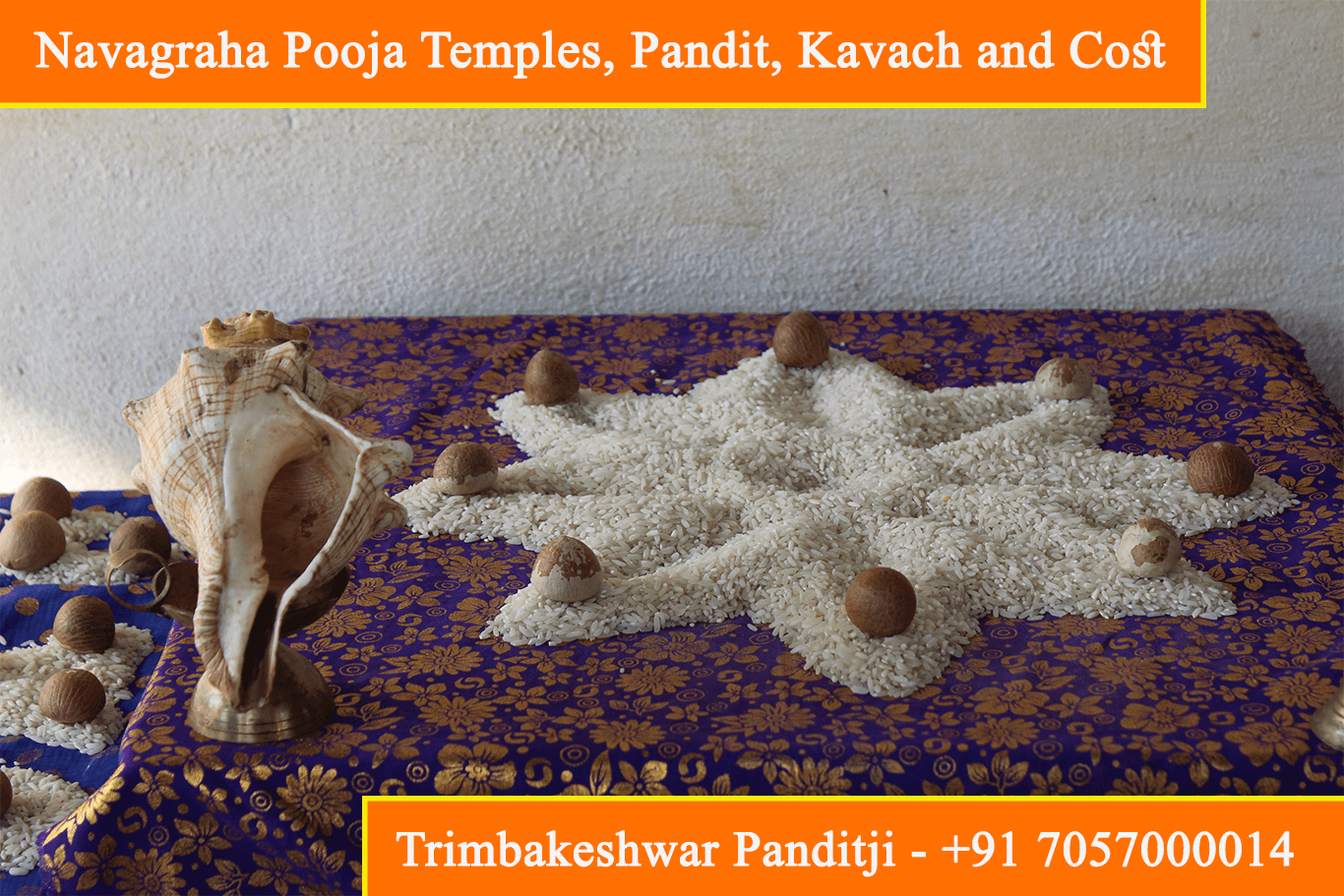 Navagraha Pooja : Navagrahas are planets, the planetoids. Our heritage considers them to be 9 in number. Nava is nine, and graha is planet, and, therefore, they are Navagrahas. These 9 planets are: Surya, the Sun, the strongest living God, who grant good health and success; Chandra, the Moon, who act as the mind and brings wealth; Mangala, the Mars, who showers bravery and success; Budha, the Mercury, who grant intelligence and wealth; Guru, the Jupiter, who praises with education, understanding and good health; Shukra, the Venus, who gives a long life and skills in fine arts; Shani, the Saturn, who gives happiness; Rahu, the ascending point of the Moon, who nourishes life; and Ketu, the descending point of the Moon, who neutralize bad effects and brings success.

Each of these planets has a blessed energy related with it. Hence, they play a heartfelt role in affecting our lives. The type of authority the planets grow over a person will rely on their position in his or her birth chart. Also their current transit position.  It is no surprise that many temples in South India have temples devoted to it.

What is the Navagraha Pooja and what is its importance?

The Navagraha Pooja is the formal worship done to the 9 planets. The day this remedy has to be accomplished rely on the condition of the person and his or her needs. And also its frequency will depend on the same. The religious guides or astrologers can assess the wants. It is based on a reading of the birth chart. Accordingly, this ritual will be taken care of.

What are the benefits of doing the Navagraha Pooja?

Planets are very powerful saintly entities, and calm them can save us from harm and do us good. The Navagraha Pooja can get for the sponsors the protection and blessings of the planets. This can help abolish negativeness and add positive vibrations in life.

The Navagraha temples in Tamil Nadu are a collection of Navagraha Temples. Dating from the Chola dynasty near Kumbakonam in Tamil Nadu. As per Hindu legend, Sage Kalava was suffering from serious disease along with leprosy. He prayed to the Navagrahas, the nine planet goddess.  He damned the nine planets to agonize from leprosy. Also the planets devoted to Shiva to soothe them off the curse. Impressed, Shiva looked in front of them and made sure that the place belonged to them. And that they would have to grace the followers worshiping them from the place.

Each temple is situated in a different village, and is observed a house of one of the Navagrahas. But, the most of these temples are devoted to Shiva. The first being the object of worship as the principal goddess and the latter as attendant goddess. Also it was made in 11th or 12th century C.E.

Nava means nine, and graha means planet or managing, grasping or recognizing power. The word graha has all these definitions. Hence, it is related with many other ideas, comprising marriage. Graha Pidanam needs cleansing or calm rituals to placate the planetary god who is causing the adverse effect. Below is the brief description of each of the Navagrahas:

Navagraha Gemstones are about the nine gems by nine various planets, as per the Vedic astrology. These stones are most auspicious as they bring health, happiness, success, and peace to its wearer. It also saves a person from adverse energies.

Below are the planets that various gemstones represent.

Realizing the importance of navagraha in dealing with unpleasant phases in life, the popularity and demand for Navagraha jewelry is also growing by the day.

Other than protecting the originality of a stone before buying, one should also ask an expert to know the favorable day and time for good results.

As per the astrology importance, a gemstone must be able to capture, grasp, and transmit the connected planet’s energy radiations. However it does not endorse various gemstones for navagraha. It does not allocate, for example, the sapphires to any navagraha planet. And the reasons range from the ability of a stone to catch radiations. Also to the accuracy with which it connects with a specific planet.

TT Gems, although, provides you with every variation that the customers wish to buy.

Navagrahas are the nine main asteroids which have deity status in Hinduism. These planets have important effects on the lives of earthly living beings. Also as per the legend they were born from the rage of Lord Shiva.

Surya, Chandra, Mars, Budha, Guru, Shukra, Shani, Rahu and Ketu all influences our daily lives. As per our Zodiac signs and our time of birth, they influence us either positively or negatively.

When we face bad luck or we fail at different times in life, we usually think that maybe we didn’t work hard enough.

All these problems might seem like a natural part of life. But they happen because of the adverse effects of the Navagrahas. Their positions and movement drastically influences our chances.

But it is possible to get back the adverse effects of Navagrahas into positive ones. The process is the Navagraha Pooja and is very rich. People can do this pooja at home if one follows the proper set of ceremonies.