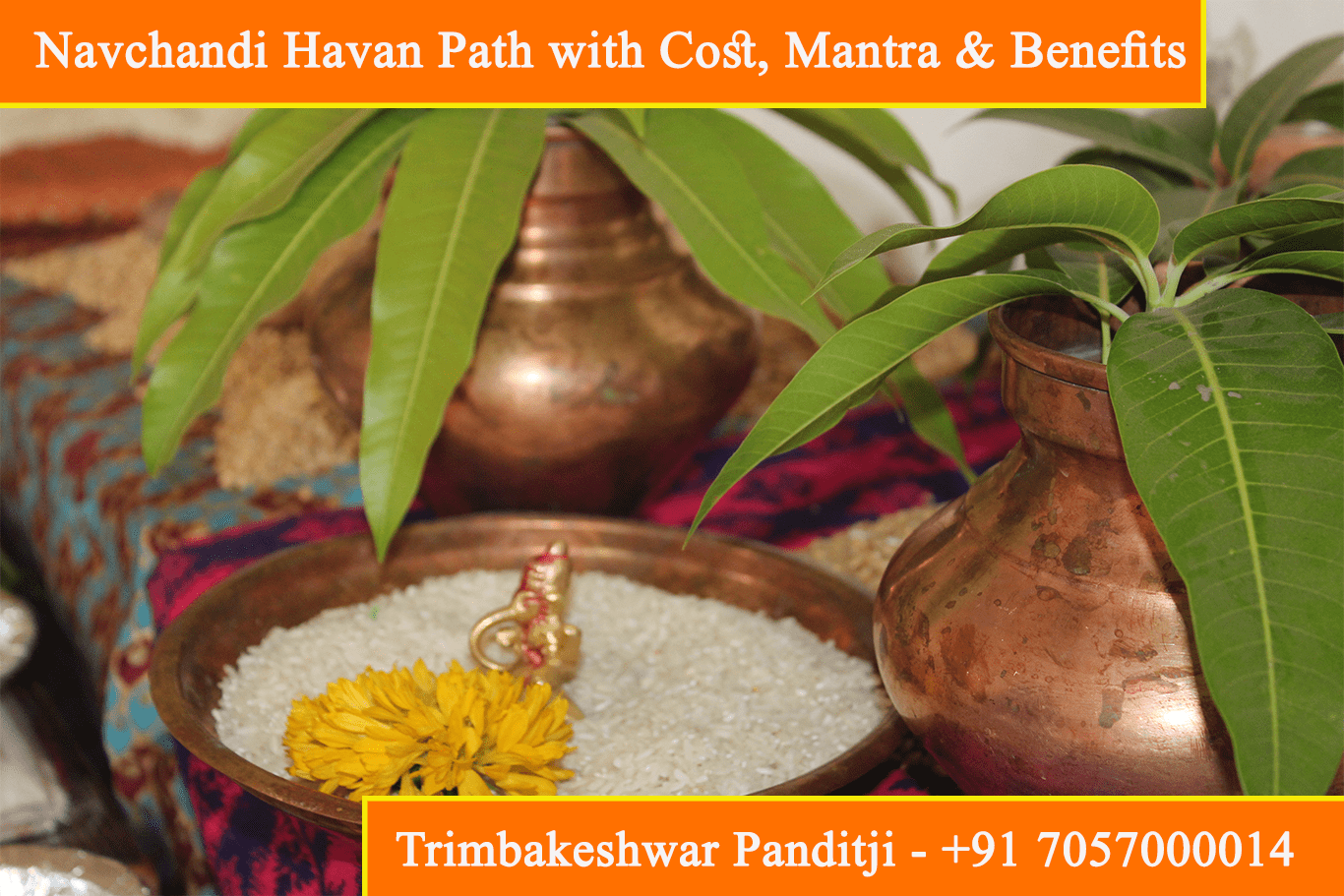 The Navchandi Havan puja is doing the Nav Avtar or Nine incarnation of Durga worship.

The Nine Avatars are:

Saptashati means reciting of 700 Shloka. It describes the significance of Goddess Durga, and her 3 power/ strength element. Also is the one of the former text. It explains Devi as the supreme power and energy that is the creator of all. Durga Saptashati mainly explains the savage battle among the good and Evil. The Goddess of Supreme energy displays her into various forms so that, peace and prosperity is preserved. This text lays the foundation on the fact that the eventual reality is nothing more than female energy. The Durga Saptashati text explains the female as the elementary creator of the Universe. The text explains her as tridevi, or the branches like the creator, Nurturer and destroyer.

The hymns written in it are in the form of praises. Also the one who stays in every perishable being. She is everything: Emotions and physical attributes, she is self- realization and intellect.

Navchandi yagna is a Nav Durga puja. This puja is to make wishes come true and also for health, wealth, strength. Also the prosperity, success and many other problems in the life. People get rid from all the sufferings by doing this Nav Chandi Yagna. This Yagna remove enemy and bad planetary consequence. By devoting this yagna man can get each success of life. Lord Ganesha, Lord Shiva, Nav Grah and Nav durga blesses the devotee.

After Grih Pravesh Vastu pooja is for vastu Bhagvan in the house before the real entry into the house. People do it to save their family from devils and purify land and house. Owner of the house with his wife do this pooja.

Vastu shanti worshiped with havan to abolish all barriers. People do havan to finish the malign effect of the stars and to make a peaceful, powerful and healthy environment. Priest do last pooja of vastu sthapna. Vastu Bhagvan protects the family from negative vibration of the earth. Maa Durga is also Goddess of power. People do Chandi Yagna to please Durga.

The Navchandi Havan is very powerful in Sanatan Dharma. This yagna helps in the betterment of the position of disturbed planets and good omen starts at one’s astrology. After this offering, the man can feel himself in a joyful environment. It has even talked about its glory in the Vedas that after the this Yagna, one’s enemies cannot damage anything. Sacrificing this yagna to Ganesha, Lord Shiva, the new planet, and the new Durga, the human life is blessed.

Learned Brahmin do this Yagya as it chants 700 verses which only an expert Brahmin can do. The Nav Chandi Yagna is an exceptional, very powerful and huge sacrifice, which gives great elegance to Goddess. In earlier times, gods and demons use this yagna regularly to be strong and energetic. It is worshiped by other deviant Gods including Lord Ganesha.

Durga havan is performed after 9 lessons of worship of Durga Saptashati, as a result, wishes of people gets completed.

This Navchandi Havan Pujan Vidya is done by the scholar Pandit. Or the Garadh Kalika Mandir or any holy place.

Doing the Navchandi yagya, blesses with vast energy. As a result, even the huge needs that may seem hopeless to a person may be defeated and at the same time Last blessings from the Divine Mother can be brought in. If the planetary condition is not good in your horoscope or the stars are not in your esteem then this puja is most powerful. Nav Chandi yagya is the mixture of 1000 mantras which are exported form Markandeya Purana. In Purana, there are different mantras for different issues.

The Kathyayani Tantra has the following benefits of reading Devi Mahatmyam:-

10 priests do this Pooja. This Pooja is of 1 day. This is an individual yagna. A person does the puja on individual name or includes their near and dear ones in the puja. People get the contact no. of the priest, to call during the sankalpa/yagna.

The mantra for this is Navakshari. It is the nine lettered mantra that has its basis in the Atharva Shirsha Upanishad, called Devi Upanishad. It is also Navarna Mantra. This is one of the principal mantras in Shakti Worship other than the Sri Vidhya Mantras. It is customary to recite this mantra when reciting the Devi Mahatmya. She lives in a place called Mahakal.

Chandi Path is a sacred scripture. ‘Chand’ means to ‘tear apart’. When a person chants the Chandi path, he is unconsciously made aware of the existence of the divine power. It will guide him out of all his issues.

The Chandi path is also the Durga Saptasati. It is of the 13 chapters. It explains the story among the Good and Evil, and how Goddess Durga destroy the devil Mahishasura. In good times, the Devi takes the form of Lakshmi and increase the wealth and happiness among her devotees. People say by chanting the Chandi path will drive away all the negative energies in the reader’s life. If people chanted all the 700 sacred verses of the Chandi Path with concentration and full devotion, then the reader will gain the energy to overcome all the hurdles in life. The best time to recite this favorable text is at the month of Chaitra or Shrad. This is also the only scripture from the puranas, which is to do the Homas.

There are a lot of advantages of chanting the Chandi path. Chanting this on all the nine days of Navratri will give the reader logical as well as calculative presence of mind. It also give bravery and motivation to the person. Reading the scripture and catching it will lead to fearlessness. Chanting the Chandi path revive the cerebral nerves and blood vessels in the body. However studies have found that chanting this in proper swar will release waves which affect humans positively. These waves make a protective ring around the reader. It boost the health and creates positive vibes around the reader.

Rudrachandi is not a variation of Saptashati or complete Chandi Patha in itself. It is normally a supplement to the real Saptashati Chandi Stava. It is in many Tantra texts. There are eight such versions of Rudra Chandi. As the name suggests, it is from Rudrayamala Tantra. This is also in many of the later Mantra manuals. As for the corresponding Moola Mantra, Rudrayamala itself gives out this specific hymn under the Navarna Krama itself. Rudra Chandi Mantra listed is in some book.

When to Perform Navchandi Yagna Pooja

Navaratri festival, Fridays, Ashtami, Navami, and Chaturdasi are mainly the auspicious days to do this havan. The date to do this havan can be fixed as per one’s horoscope, the yoga, and thithi of that particular date.